From mid-table mediocrity and all areas in between…

It has been a week dominated by European competitions. I hope you found those all-important trading angles in the Champions League and Europa League matches. I do find some of those matches tough puzzles to solve.

I guess Over 2.5 Goals in a Monaco and Dortmund match will not win me any awards for originality, but Juventus keeping Barcelona goal-less in the Nou Camp…? You’re having a giraffe!

I suppose if ever a team was built to defend, it would be an Italian team.

We return to the business end of league competition and it is vital that you know the teams in each league with the following characteristics:

And one last characteristic…

I will be pointing out teams with these characteristics in the Daily Research at delayreacttrade.com.

You will have seen, I hope, an example of a team with nothing to play for in Celtic 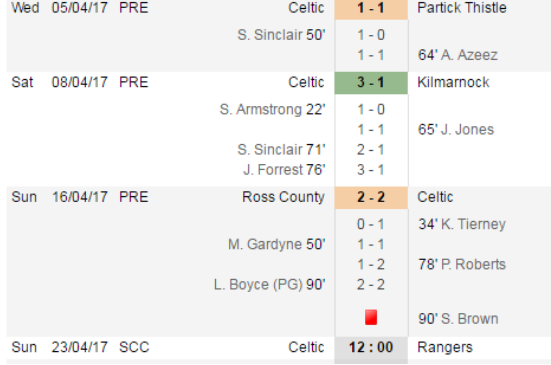 Notice how Celtic conceded straight after scoring. Eye off the ball? Lack of incentive? Trouble concentrating with the deck chairs out already? In their next league match, they may be vulnerable.

Brighton are guaranteed promotion so watch out in their next few matches. They may even pick Des Lynam to play up-front. They have nothing to play for.

I have researched as many matches as possible for Saturday and Sunday and would ask that you ready yourself for the skirmishes to come, and note those teams with nothing to play for. It may not be because they have won the league, it may be mid-table mediocrity! Brentford in the Championship are a prime example. Even if they win their remaining matches, they cannot reach a play-off spot. They cannot be relegated either!

Oh and before I go…

The big guns are out at Monte Carlo for the tennis and this is something you should give due consideration to.

It’s simple really. We want a short-priced favourite. He gets in a pickle and loses the first set. (Better yet, gets broken early in the second set – that is the ideal!) Back said player at enhanced odds. Watch him win the second set and, hey presto! Easy trade!

The odds swings may not be as dramatic as the football, or the odds as big as a well-constructed Correct Score trade, but you can make consistent profits.

Here Tomas Berdych was at odds of 1.12 pre-match. He lost the first set. His odds in-play hit 1.97 and higher. Relative to that 1.12, I see some value here. He won the second set sharp as you like, and we traded out.

There are other tennis markets to trade, such as set betting. I’ll be working on a piece for you for the summer.

In the meantime, see you at the weekend for a live chat. They have been doing rather well of late. What you get in a live chat is full coverage of all matches and not just those mentioned in the Daily Bulletin. Heck, fancy a 10/1 payout in Vietnam? That was my first profit for live chatters last Sunday!