Why I love November to April…

It’s no coincidence that my football backing strategies at What Really Wins Money are starting to profit.

November is the time when form is embedded and with better form, comes better decision-making, and better profits.

And DRT will benefit from this too.

Form will now have a context the more matches have been played. That context comes via the Challenge Table. Here’s an example from the English Premier League…

This is the Challenge Table a.k.a. the matches table at www.soccerstats.com.

It gives context to the form. Only one win in four matches for Leicester is not that great for recent form, but note above that they have exclusively lost to top-nine teams this season.

Six losses in seven for Burnley vs the top-13 home and away.

With a simple look at the Challenge Table, you can get an idea as to what to expect when 10th in the league (only losing to top-nine) meets 15th in the league (losing all bar one vs top-14).

Eventually you’ll get to a point where patterns become clear. The Swedish Allsvenskan is a great example as the season is near its end. 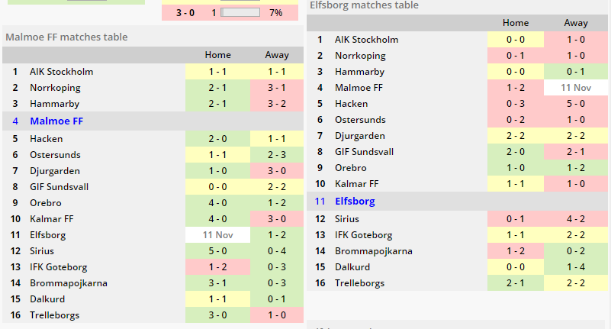 Just by looking for patterns, we can get an indication for how 11th in the league will play vs top-six teams away. And how fourth in the league dominate defensively and in attack at home vs mid-table teams. Win to nil? Shock were Elfsborg even to score?

Sit back and enjoy! See you for a live chat or two this weekend.