The main lessons of tennis trading

I hope you have enjoyed the tennis coverage on Twitter @drtclub this week. I certainly have, as you can see by the numerous green screens that are available for your inspection on my Twitter feed.

Tennis is a great substitute while we wait for the summer leagues to flesh out (Scandinavian League and Ireland).

You’ll see on Twitter that I am collecting a lot of screenshots. These screenshots will all come in handy when I put the tennis trading methodology together for you all.

This is the first time that I have gone from beginning to end in a tournament which is not a Major. It is a learning experience for me and I have picked up a lot from my focussed exposure to players day-in and day-out.

Here are the main lessons. Pay attention at the back!

The French Open begins next week so I will be wearing a beret for the duration in order to get into the mood. See you on Twitter @drtclub next week.

Football is still being played. Let me introduce you to the idea of ‘contrarian trading’.

A contrary was a member of a North American Indian tribe who deliberately adopted a behaviour which was the opposite of his tribe members. A contrarian trader does the same. An example will illustrate perfectly… 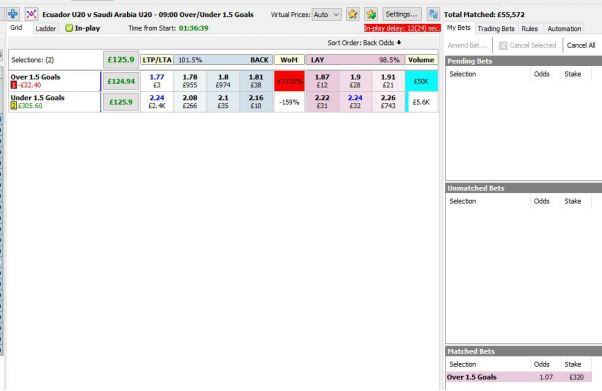 The above example shows the power of contrarian trading. In this match, Ecuador u20 went a goal behind to Saudi Arabia u20.

Ecuador u20 were 1.35 favourites so the market assumption was that they would equalise and push on.

I decided to lay Over 1.5 Goals at odds of 1.07. Liability is low and this being the under 20s, all it takes for these testosterone-laden youngsters to get distracted is the sight of a pretty face in the crowd!

And so the match progressed and that Ecuador u20 goal did not materialise. A £22 liability here could produce a £125 green screen.

The goals did come but Saudi Arabia actually scored next.

I will be showing you some more contrarian examples as I collect them.

In the meantime, get out the baguette and smelly cheese, the beret and very small espresso and join me for Le French Open dans Le Tennis, Rodders, next week.