I fancied a change… and lots of you profited!

I thought I would change things around last weekend.

Instead of Super Sunday, we had Super Saturday! It was an excellent trading session, where profits largely came in a flurry of time between 4pm and 5pm. I was delighted so many Live Chat followers profited.

Strike rate has increased this November and is, I hope, likely to continue to remain consistent from now on.

And these are the number of matches played in, say, the English Premier League this season.

The more matches we have under our belts, the greater the statistical resources we have to work with. And that means the patterns and sequences are stronger and better decisions can be made.

The real boon at this stage is what is called the ‘Challenge Table’ at www.soccerstats.com.

Once we have a decent number of matches under our belts, we can begin to see how teams perform against others in, say, the top third, middle third and bottom third clubs in the league.

Take a look at West Ham (aka ‘West ‘Aaaam’ for their fans) and Arsenal (aka ‘the Arse’) and see what their Challenge Table reveals. 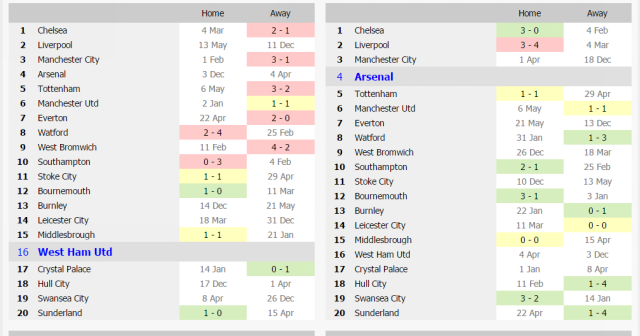 What do the visuals tell you?

Even with this simple analysis, you get a feel for the match. I say ‘simple analysis’ as we have to factor in the ‘London Derby’ aspect, as well as Arsenal’s up-and-coming mid-week Champions League fixture.

So do take a look at the Challenge Table at www.soccerstats.com if you want an at-a-glance look at how teams perform at home and away vs top, middle and bottom third teams.

I hope this strong run continues. We are nailing some big profits at the moment.

I hope to see you for a Live Chat this Saturday or Sunday but there’s also one scheduled for tonight on Twitter at @DRTClub at 7pm!