Bonjour Rodders! Football trading is back!

The French Ligue 1 is one of the major European leagues which begins this weekend. As do the other-than-Premiership English Leagues. The Scottish Premiership also begins.

Great news! The wait is over!

I do hope you have enjoyed the tennis coverage over the summer. I will try to keep it up but football is the primary reason behind delayreacttrade.com.

This early season still sees us working with little form. So, in-play stats are king! Get to know www.williamhill.com and www.flashscore.com. Those are the two key resources for live stats.

I will not be doing a full live chat yet. I will be on Twitter @drtclub during this early part of the season.

And to help you out, I have signed up for a couple of bits of software which purport to give us the edge in-play. We shall see…

I’ll see you over the weekend. With leagues such as the French Ligue 1, we need to know major transfers.

I would recommend www.soccerway.com and its transfers feature. Below is the list for Paris St Germain: 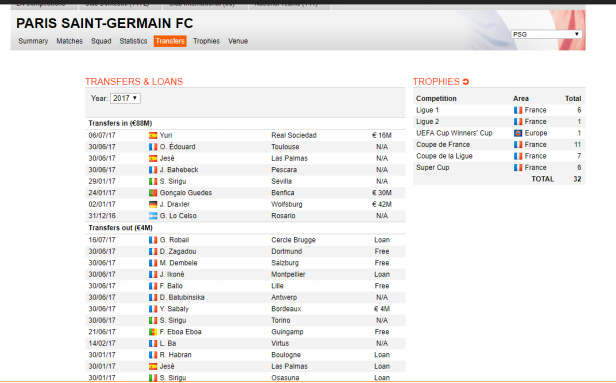 There are no major concerns as regards the major players, so a positive there. If a team has lost a key player (Everton and Romelu Lukaku anyone?) then the impact could be great unless an adequate replacement has been found.

See you tomorrow! It’s great to be back!