The Betting Gods looked after us on Tuesday…

This past Tuesday’s Champions League action was fun! And profitable, too…

The endless search for value is the purpose of DRT. Value in my eyes translates as ‘low risk for big potential rewards’.

Sometimes it takes a creative approach to create that value…

The screenshot below is taken from Betfair’s Sportsbook, effectively the bookmaking division of the Betfair website (we normally deal with the Exchange). 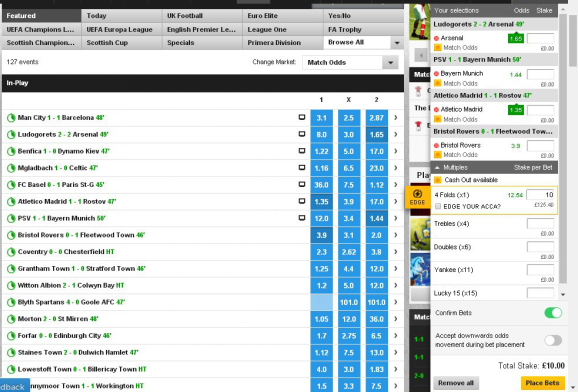 Let’s set the scene. It is the beginning of the second half in all of the 19:45 kick off games. As there are so many strong favourites playing it is difficult to find a trade with a really good return. I did fancy Arsenal to beat Ludogorets… but then so did the market.

I also fancied Bayern Munich to beat PSV… but then… so did the market. Ditto for Atl Madrid against Rostov.

The one match where I saw some value was the Bristol Rovers v Fleetwood match. Remember the importance of in-play stats?

On this occasion it was Bristol Rovers dominating everything except the scoreline: 0-1 to Fleetwood with a whole second half to be played allowed odds of 3.9 for Bristol Rovers. Not odds to have me a-whoopin’ and a-hollerin’!

So we have three matches with extremely well-fancied teams and one match where the market still thinks Bristol Rovers will win.

The accumulator, as you can see, paid out around 12/1 for extremely strong favourites, and a bit of a punt on Bristol Rovers.

Turns out the Betting Gods were looking after us as Arsenal found a winner, Bayern asserted, Bristol Rovers came from 0-1 to 2-1 and Atl Madrid scored a last-gasp winner.

Do look out for my use of this tactic in the future.

The trading angle is still alive as the odds of the accumulator change as goals come in. You have the facility to trade out (‘Cash Out’, it is called) if the accumulator is shaping up well.

See you again this weekend for a Live Chat or two: there will definitely be one on Sunday, maybe Saturday too.

It is my girlfriend’s birthday on Saturday and I am hoping to get a Live Chat in, but I do hope you will be forgiving if this is not the case.