As Betfair trader Borat would say ‘ I very excite’.

Like my old football trading pal Borat, ‘I very excite’ about this weekend. 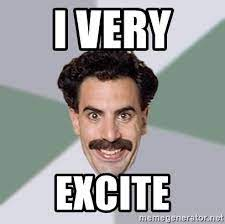 We have a raft of familiar leagues beginning this weekend. Here’s a list of some of these leagues :

Add these leagues to :

And we’re going to be busier than Allison Becker was v Man Utd in that friendly in Bangkok last week.

Exciting times ahead.  I look forward to sharing any trades I find with you over the weekend. Inplay stats will be very useful on these opening days. The main positive we have is….familiarity with some of the teams.  There are some real ‘Old Reliables’ re-surfacing this weekend, such as Midtjylland, FC Copenhagen, Young Boys, Dinamo Zagreb amongst others.

On another subject, do please let me know your thoughts on tennis. I have been mentioning it daily in the DRT review/preview videos which I would encourage you to watch at DRT Facebook each day. Like football, I think a key to success is to ‘pick our battles’. Just as we do not, and should not, trade every single football match, it is a similar story with tennis. I start each day by picking matches of potential at www.tennis24.com featuring players I know.  I am sure my knowledge base will grow with daily exposure to tennis matches and their attendant results.

See you over the weekend! Exciting times ahead!