Hope you are enjoying the Euros and have been able to pick up some DRT profits. I hope, too, that I have got across here in the DRT eletter, via the Daily Bulletins at delayreacttrade.com and on Twitter @DRTClub that it is the late, late show in France. A concerted focus onwards from the 85th minute in matches tends to yield a successful trade, as witnessed by the last set of three Euro Group matches. 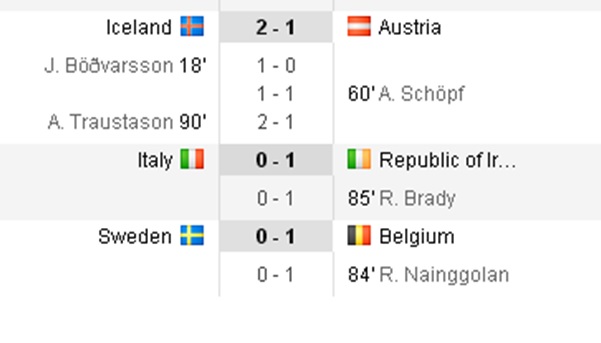 Winning goals for Iceland (90th minute), Ireland (85th minute) Belgium (84th minute) have added to the huge amount of goal action in the later stages of Euro matches. So how do we profit? If it’s 1 - 1, we can a) lay the draw b) lay the 1 - 1 correct score or c) choose a team to win and back them in the Match Odds market. Bets a) and b) are what I like to describe as ‘neutral bets’ - i.e. these two options can profit regardless of which team scores the late goal. Again, with Italy v Republic of Ireland, you could have chosen the neutral options (laying 0 - 0 correct score or laying the draw… which reached a low of 1.35 as I was tracking it!), or you could take a greater risk and pin your colors to the Italian or Irish mast. This was the similar case with Sweden v Belgium. Moving on to the Hungarian v Portugal match... Let’s take a look at the progression of the goals and also look at how, I hope, you profited from this match.

What is our trading angle here? Over on the Daily Bulletin I said I expected Portugal not to lose. So folks, what do we do when Hungary take 1 - 0, 2 - 1 and 3 - 2 leads? We lay the Ferenc Puskas (famous Hungarian trading strategy) out of them! Note, too, a Desmond Tutu! Did you notice too (and I gave it a brief nod in the Daily Bulletin), that Ronaldo had not scored in two Euro matches…? Surely he was not going to score in THREE consecutive Euro fixtures? I call this ‘sequencing’. When prominent strikers with the calibre of Messi or Ronaldo go a handful of matches without scoring, expect them to score and score soon! We have the First Goalscorer or Anytime Goalscorer markets we can exploit for this. The Euros matches return on Saturday, Sunday and Monday. It’s crunch time now! There will be no team changes now! New Balls Please! No, I’ve not been kicked in the vernaculars by my girlfriend for watching too much football… I’m referring to Wimbledon. Monday sees the start of this classic tennis tournament and I will be tweeting @DRTClub throughout it. Those of you who followed me during the early rounds of the French Open at Roland Garros will attest to the good trades. I will be focusing primarily on the first three rounds at Wimbledon and on seeded v unseeded players. Tennis trading is a DRT Sport. We have the strong favourites who, rather than conceding the first goal, may lose the first or even second set  (at Wimbledon the men’s matches are played best of five sets). So please do join me @DRTClub on twitter from this Monday onwards. I’ll be covering as much tennis as I can… along with the Euros of course! Twitter is all part of the service and I’ll pass on trades over there to you, like this match…

Do you recognise this trade? The home team was at odds of 1.78 pre match. Tokyo were 0 - 2 up at halftime. Yes, an away team leading 0 - 2 and not the favourites. I urged followers on twitter @DRTClub to lay Tokyo at odds of 1.16 and also back Urawa Reds at odds of 29. It ended 3 - 2. These are the kinds of trades I try to uncover for you on Twitter for both football and tennis. Trades could certainly come from obscure leagues such as the Japanese one. See you for the Euros tomorrow. I’ll do my research as usual which will probably have that reminder  - watch out for late goals!!